How Human is Holacracy?

In my last post, I’ve proposed a comprehensive, approach agnostic, self-management and self-governance framework for the human organization.

Finally making sense out of the many self-management options available and matching them against the specific needs of each organization was among the top potential applications the framework had in my mind. Knowing a bit about Holacracy thus convinced me to start exactly from one of the most known and talked about self-managed human operating systems.

The questions I wanted to explore regarding Holacracy included:

Let’s search for some answers by applying the human organization map to Holacracy: 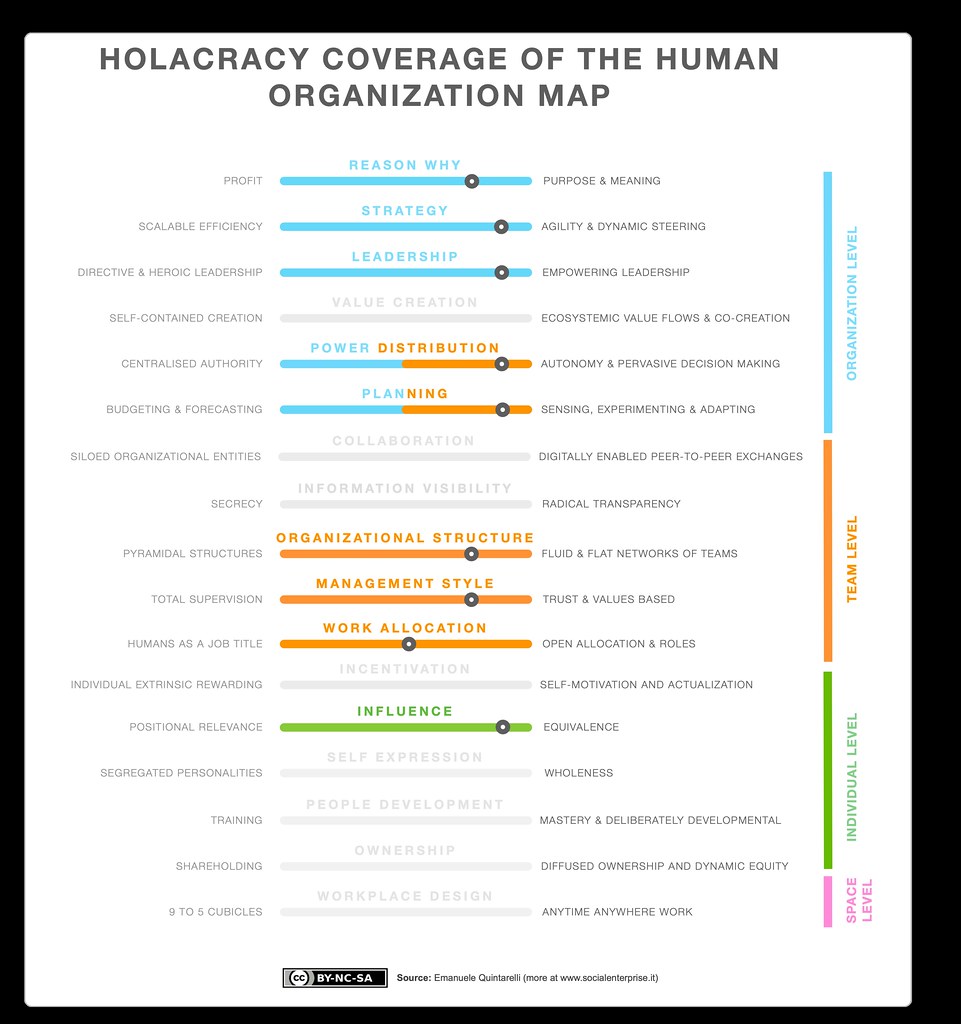 When we get into each dimension, we see that:

At the best of my knowledge, Holacracy is instead not giving direct advice on the remaining dimensions (in gray) of the Human Organization Map. Some critical aspects that jump out of the mapping at a higher level are in fact that:

What the analysis really highlights is that Holacracy brings and encodes a vision of the world according to which the 3 following statements hold true:

But is this really true and does it really work in practice?

Answering such final questions probably goes beyond the scope of the Human Organization Map and instead gets into our innate need for connectedness, safety, meaning, fun, love, improvement, ownership and probably much more. By looking at the map, the feeling is anyway that we can imagine an organization as the sum of its Resources (assets, locations, tools, funds, ownership, etc.), its People (employees, partners, suppliers, customers that create value together) and its Operations (organizational structure, governance, policies, metrics, roles, rules, etc). Holacracy only addresses the latter.

Unfortunately the other two (resources and people) both have a dramatic effect on work organization and operational effectiveness, even if we do our best to avoid that. One evident example is the huge personal and professional change required to any individual (people) to accept, adhere and be effective within the new engine introduced by Holacracy (operations).

While more apps can be easily added on top of the Holacracy operating system, our nature as social and ethical animals cannot and probably shouldn’t be forgotten in our quest for agility, efficacy and effectiveness. The toll could having the perfect car that remains unutilized in the garage.